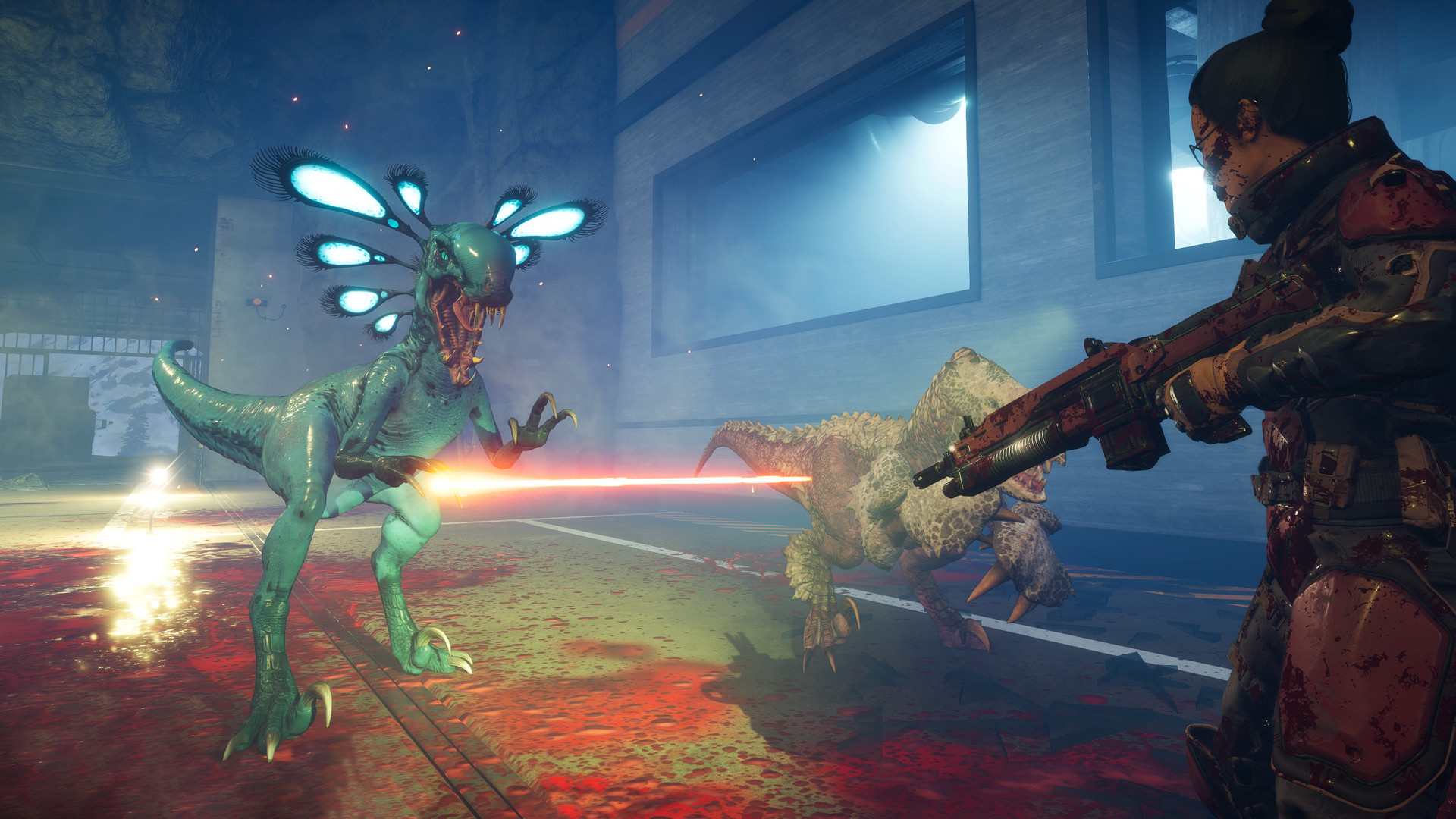 In Jurassic Park, they should’ve just quickscoped the velociraptors, obviously. I’ve killed a lot of them that way, although admittedly I’m always gnashed into pulp eventually, because Second Extinction’s world is effectively overrun with infinite dinos (sometimes they just appear out of nowhere). It also doesn’t help that some of them shoot magic electricity and others burrow into the ground like sandworms. Sam Neill and Laura Dern never had to deal with that.

I like that Second Extinction, which released in Early Access earlier this week, gets to the point quickly. You and your co-op pals get into drop pods, plummet to a dinosaur-infested earth, and then kill loads of the bipedal bastards while completing a simple objective, like finding and blowing up a cavern that is extra full of dinos.

It sucks to play alone, because all of the dinos are trained on you, and so there isn’t much to do but backpedal and hope their lunges miss. Adding at least one co-op partner loosens things up, allowing you to circle-strafe and climb around on the environment instead of just hustle in reverse. It’s almost fun, but I mostly enjoyed exploring the tundra (did dinos live in snowy climates?) with Chris because it was a chance to hang out. Truth be told, I would’ve rather been playing something else, such as Avalanche’s other co-op shooter, Generation Zero, which features giant robots instead of dinosaurs.

Generation Zero is hardly perfect itself, and too much of it is spent looting, managing inventory, and tinkering with weapons, but at least I have a pretty badass 50-caliber sniper rifle that sets things on fire in that game. I don’t like the guns in Second Extinction, of which there are just a few (assault rifle, scout rifle, pistol, minigun, shotgun, and grenade launcher). They lack dino-grade ammo and magazines, so I’m constantly reloading. It’s like I’m hunting moose with a .223 varmint rifle in theHunter: Call of the Wild.

The strong recoil on the assault rifle feels disproportionate to its power—it’s weak, so why is it also unwieldy? The secondary shotgun feels wimpy, too. The scout rifle is fun to be aggressive with, though there wasn’t much use for its scope, at least when fighting low-level dinos.

While I played Second Extinction, I thought about how much more fun it was to plug charging bulls with dual double-barreled shotguns in Serious Sam 4 recently. Enemy health and the speed of movement, weapon switching, and reloading in that game is impeccably tuned for rhythmically deleting hordes of enemies that run straight at you. I appreciate it more now having played a game that’s out of key.

Like Avalanche’s other open world games, each of which comes with its own special jankiness, Second Extinction does have its moments. Now and then a dino’s head is blown off and its body launched 80 yards. Avalanche does fantastically over-the-top explosion effects. They’re so bright and there’s so much screen shake that they make me curse with surprise every time. (I wish they actually killed more dinos, though. Even explosions are weak.)

Here’s Chris’ perspective of some giant gas tanks I blew up:

My favorite little thing about Second Extinction is that ammo resupply stations are fired to the ground from orbit, and then after a short time launch back to space. If you’re standing near one when that happens, you get knocked on your ass. You can also launch objective items into space by attaching boosters to them. It’s not quite as good as Metal Gear Solid 5’s Fulton, but still pleasingly silly.

A couple disappointments, though: One, when I call down an ammo resupply pod on top of a dino, it doesn’t squish or explode it. I think it does damage, but it’s hard to tell. Two, standing on top of a package as it launched did not send Chris into space. It just went through him, although you can see me get bodied by a different launch at the end of this clip:

Second Extinction crashed on me once, though I was able to load back into the co-op session with Chris after I loaded it back up, which was nice. When Chris and I both died near the end of a mission, respawned, and trudged back to the cave we were meant to blow up, one of our TNT-loaded minecarts had been shunted back to the surface. We thought we’d have to redo the whole thing, but it kindly let us finish the mission anyway (urging us to escape from the caves we weren’t in). It’s buggy, but you can roll with the bugs.

Still, I recommend waiting on this one. Second Extinction will be in Early Access for an undetermined amount of time, getting fixes, new weapons, new dino types, and so on. Given that it’s not exactly the storytelling event of the year—though there is quite competent voice acting in it—there’s no reason to rush into it. Let the dinos get a bit more fun to exterminate, and in the meantime, there are other co-op shooters to play.

Left 4 Dead 2 just got a big update, for instance, and you can play that as a velociraptor with the right mod.

Among Us makes for a surprisingly decent esport

This Yakuza-themed ramen is worth AU$400

Frog Fractions DLC gets a big pile of secrets and achievements

Months after studio closure, The Lord of the Rings: Adventure Card Game gets an update